Finding balance in a world of extremes 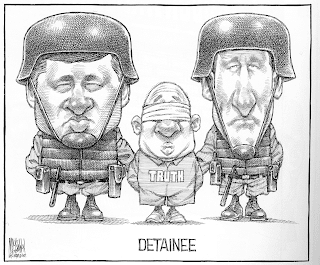 Since the Anything but Harper campaign is starting to gain momentum, one news article commented on it and did a little bully playing the victim for Harper. They said that eliminating a single opinion wasn't right. However, that's exactly what Harper is doing.

Surely we don't want to go from one extreme to the other. Anything is a pretty big word when we say anything but Harper. Which is unfortunately what we sometimes do in British Columbia. Well that didn't work so let's try this. Well that didn't work either so let's try this. Back and forth from one extreme to the other. The answer is finding a balanced approach to politics and life.

Preston Manning challenged us to look beyond the left and right and look at the issues. That mission was lost when they changed Unite the Bright to Unite the Right and merged with Mulroneyism.

The Shit Harper did web site quotes Harper as once saying "Kyoto is essentially a Socialist scheme to suck money out of wealth - producing nations." Oh really. I always thought the Kyoto Protocol was an international attempt to fight global warming and promote the stabilization of greenhouse gas. What on earth does that have to do with Socialism? Does Stephen Harper really think protecting the environment is a Communist plot to take over the free world? That would be an example of extremism.

Harper does a lot of name calling and over sweeping generalizations. He continually calls people who disagree with him socialists. I suppose if you're a fascist, anything left of fascism would be considered socialism but not in the real world. Harper wanted to ban all other parties from the televised debate except for him and Ignatieff claiming that those are the two choices and of you don't vote for either of those two options you are a left wing socialist or a separatist. Aside from being absurd, what if I was? The founding fathers of the American Constitution were separatists. Everyone has an equal vote in a democratic society. Free speech is not just for the elite. It's for everyone.

I personally disagree with Harper wanting to build a huge number of more jails at taxpayers expense for nonviolent crime like possession of pot. Does that mean I go to the other extreme and support the legalization of all drugs including crack and crystal meth? Let's hope not. Yet that is a position the Green Party has taken. But there's a lot of other things in the Green Party I do support like protecting the environment. No single party is all right and no single party is all wrong.

There clearly are more than two options to vote for this election. I'm voting for Jack Layton because I trust he will protect pensions and medical and he's the only one that opposes the North American Union and the HST. Yet Stephen Harper claimed "The NDP is kind of proof the Devil lives and interferes with the affairs of men." I don't suppose you can get more absurd and offensive than that.

The key is very simple. We need to stop focusing on brainwashing the public and we need to start listening to the public. Remember when the Reform party talked about referendums and giving their MP's free votes? Harper has gone to the other extreme which is far from democratic.

We need to proceed with a Minority government. Move forward on the various political party's common ground and not proceed on any of the party's extremes where there is not consensus. That would mean taking the amendment on the crime bill. It really is that simple.
Posted by Dennis Watson at 10:39 AM