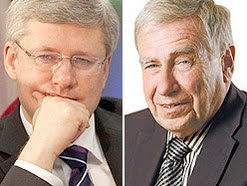 Harper claims that he never knew about one of his top adviser's criminal record. Oh really? Isn't it common practice to do a security check before becoming privy to classified information? I think it is.

In fact, Bruce Carson said he told Prime Minister Stephen Harper's chief of staff in 2006 all about his criminal past and no red flags were raised about him joining the Conservative government as a top advisor.

But Harper insisted Monday there's no way he would have hired Carson if he knew about his criminal convictions for fraud. Personally, I think Harper is lying AGAIN.

The Canadian Press revealed Monday that Carson was convicted on five counts of fraud -- three more than previously known -- and received court-ordered psychiatric treatment before coming to work as one of Harper's top advisers.

Yet his criminal record for fraud isn't the real issue. The real issue is the Harper scam he was involved with that also involved a 22 year old escort. One of Prime Minister Stephen Harper’s former top advisers is now the subject of an RCMP inquiry for allegedly using his insider connections to land federal contracts worth millions and shovel some of that money to his fiance, an escort that goes by the name of Leanna VIP.

Bruce Carson, 66, was trying to use his political connections to land a deal from the feds that would have seen an Ottawa-based company win a multi-million dollar deal to supply water filtration services for First Nations.

Twenty-two-year-old Leanna VIP, whose real name is Michelle McPherson, works for that company. Carson was trying to set up a deal that would see McPherson get 20% of any purchases the federal Department of Indian and Northern Affairs made from H2O Pro of Ottawa. He’s already bought her a black Mercedes and APTN reviewed records that show the two share a $400,000 house on a two-acre lot with an in ground pool near Ottawa.

Carson is a former lawyer who was disbarred, convicted of theft and sentenced to 18 months in jail in the early 1980s for stealing money from clients of his law firm. But he rebounded from that to work in the offices of three prime ministers - Brian Mulroney, Joe Clark and Harper.

Carson worked as a senior adviser to Harper during Harper's days in opposition through to his becoming prime minister in 2006, and left the PMO in 2008 to become the first executive director of the Canada School of Energy and Environment.

Bruce Carson's insider trading scam was no different than Raymond Sturgeon's fighter jet scam. The only difference is that Carson's criminal record was made public so he's fired while Sturgeon is an Ontario north Tory candidate. Go figure. 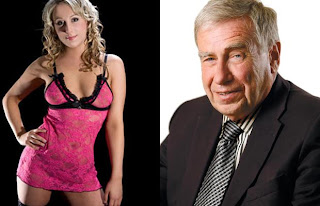 And the scape goat is... William Elliott. CBC claims that The current head of the RCMP was responsible for giving security clearance to one of Stephen Harper's former top advisers with numerous criminal convictions.

Elliott, who was hand-picked by Harper to become the Mounties' first civilian commissioner in 2007, is stepping down in the summer after a controversial reign and public battles with senior RCMP brass over his management style.

So Elliott was hand picked by Harper for the RCMP position and he approved Harper's pal Bruce Carson to be a top advisor despite his criminal record for fraud that he claims mentioned it in his application for the position. Harper didn't know about
Carson's criminal record but William Elliott did and it never occurred to Elliott to mention it to Harper. I find that very hard to believe. I think he did mention it and Harper pulled a favor to get his friend approved for the position.

Harper's still denying it and I still say he full of shit. Harper claims that security clearances are done independanly passing the blame to his pal Elliot.

Former security adviser Bruce Carson was independently cleared to work in the Prime Minister's Office, and it wasn't until later that the "full extent" of his criminal record became clear, Stephen Harper said Wednesday.

There is no way the RCMP wouldn't tell Harper his Senior advisor had a criminal record for fraud. It is far more likely that the RCMP approved Carson's security clearance as a favor to Harper. Now he's trying to pass the buck. Again.

"I already explained that I was aware of Mr. Carson's difficulties a long time ago .… Now later we learned other things, and I'm not sure why that happened, but that's the reality, and we'll have to look at why that happened, and we will be doing that."

So he was aware of Carson's difficulties a long time ago. Now later we learned other things. Like about his insider trading scam getting funneled to his 22 year old escort. Ooops.

The network revealed this week that before Carson proposed to Michele McPherson, (the 22 year old escort he was caught funneling government contract funds to) he was involved with another prostitute, Barbara Lynn Khan, a woman who was convicted and served time in the U.S. for money laundering after authorities alleged she ran a prostitution ring.

According to APTN, Khan was an escort at the time she met Carson. The Globe and Mail reported that Khan was convicted in the United States in 2003 for maintaining a bawdy house, as well as aiding and abetting prostitution. The newspaper, citing public records, reported Khan was convicted a year later of the more serious U.S. federal offence of money laundering. She was subsequently deported to her native Canada.

Carson worked for Harper when the Conservatives were in Opposition, helped on the transition team that smoothed Harper’s takeover of power in 2006 and went to work in the PMO for the following two years as Harper’s senior policy adviser and troubleshooter.

Bruce Carson brought a reported ex-prostitute and money-launderer to 24 Sussex Drive to meet with the prime minister and his wife during a party at the official residence, the Conservatives have confirmed.

Property records obtained by The Canadian Press show Khan and Carson paid $400,000 in November 2009 for a condominium in downtown Ottawa. Khan apparently still lives there, although she and Carson have reportedly separated.

MaCleans reports that Mr. Carson’s fiancée’s mother, who works for the water filtration company that Mr. Carson is alleged to have represented.
Posted by Dennis Watson at 12:20 AM